March is now the FRONT MONTH for all e-mini contracts. March is H8

so YMH8 is the March mini Dow futures

Industry experts Dave Hightower, of The Hightower Report, and Virginia McGathey, President of McGathey Commodities, preview the December 12 USDA report discussing corn and soybean yields in advance of its publication.

The CBOE 1 bitcoin contract launched last night in what I consider a relatively successful first day. The CBOE contract controls one bitcoin while the CME contract set to launch this coming Sunday evening controls 5 bitcoins.

We saw approx. 4000 contracts traded on the January contract of the CBOE with a high of 18850 and a low of 15,000 ( where the market opened…) The contract is very volatile and the bid-ask spread is still wide.

END_OF_DOCUMENT_TOKEN_TO_BE_REPLACED

Big USDA report tomorrow, if you are a grain trader!

END_OF_DOCUMENT_TOKEN_TO_BE_REPLACED

Are the Lows in for the Grain Markets? A USDA report was published this past Friday and it seems that once the information was digested by traders, there might be room for a potential rally in grain markets.

read full article along with charts at:

END_OF_DOCUMENT_TOKEN_TO_BE_REPLACED

1. While I mostly discuss e-minis, crude oil, gold and bonds for day trading….I do follow about another 15 active futures markets, including the grains ( corn, wheat, beans, bean meal and more). Big reports for the grains tomorrow. here is a quick outlook from AgWeb:

“We’re not expecting a big jump in ending stocks,” he says. “We don’t expect major changes.”

However, the report could be bearish if it shows a bigger-than-expected increase in ending stocks, according to some analysts. The report is based on a survey of farmers taken around Sept. 1, the end of the old crop year.

“We suggest that USDA missed estimates on corn exports and ethanol,” Nelson says. “We look for a moderate increase in old crop soybeans,” he adds, pointing to the fact that Allendale estimates weaker soybean demand and less domestic crush than USDA.

2. Tomorrow is the last trading day of the month and quarter! pay attention as certain markets will experience higher volatility. I wrote the following on the bonds market based on my years of observations:

Bonds are known to make some sharp moves right around 1:30 Central time ( 30 minutes before what used to be the pit close)

Here is a bond chart from last month’s last trading day….Pay attention to the WIDE range during the whole day and the large moves in the last 30 minutes!   (vertical line marked) 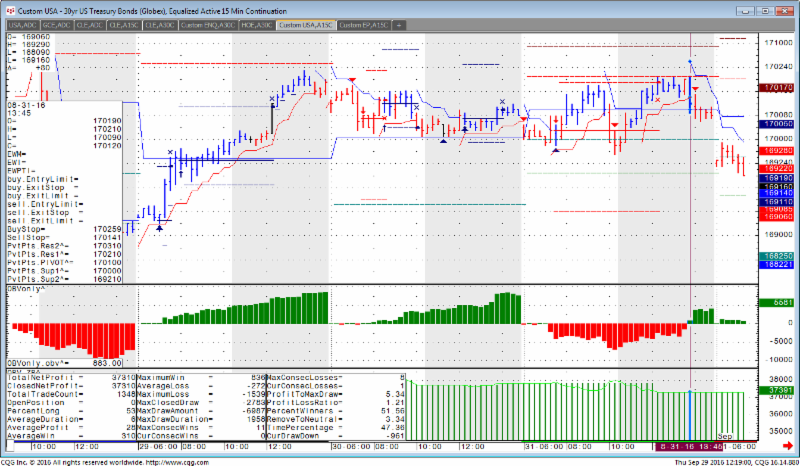