Important notice: For those of you trading any stock index futures contracts, i.e., the E-mini S&P, E-mini NASDAQ, E-mini Dow Jones etc., it is extremely important to remember that we are now rolling over and trading the December contract.

The month code for June is M8

Traders with electronic trading software should make sure that defaults reflect the proper contract as of Friday morning.

Please close any open March Currency positions by the close on Friday the 15th.

END_OF_DOCUMENT_TOKEN_TO_BE_REPLACED

Be careful and make sure you control your emotions, these are not the days for “revenge trading” and “double down” etc…( actually no day is good for that but with this type of volatility, you can get punished very quickly and pretty hard).

END_OF_DOCUMENT_TOKEN_TO_BE_REPLACED

Moisture levels have remained very low across the majority of the hard red wheat belt in the central Plains throughout the winter, with moderate drought now widespread across eastern Colorado into central Oklahoma, and severe to extreme drought located in southern Kansas, Oklahoma, and much of central and northwestern Texas (see map below).

The outlook for the next few weeks shows an upturn in moisture across the northern Plains, with Colorado and Nebraska likely to see some notable improvements in moisture in the form of snowfall. Meanwhile, moisture receipts will likely remain below normal across south central Kansas into west central Oklahoma and northwestern Texas. While moisture needs this time of year are very low for wheat as it remains in dormancy, an upturn in moisture will be critical for these areas once it emerges from dormancy.

However, a drier pattern is expected to continue across the majority of the region in March, which will likely result in some significant stress as spring crop growth resumes. An upturn in rains is possible across the heart of the hard red wheat belt in April, though, which should begin to improve moisture supplies and crop conditions. The rains will be critical to prevent substantial yield reductions for the wheat crop.

END_OF_DOCUMENT_TOKEN_TO_BE_REPLACED

With the recent volatility the CME have raised some of the overnight margins for stock index futures.

Most of our clients enjoy $500 daytrading margins for the contracts below, depending on the platform and in rare cases market conditions. Few of the trading platforms will use % of overnight margins and/or  if you plan on holding positions more than intraday than note below:

BE CAREFUL!! THESE ARE NOT “REGULAR OR NORMAL TIMES”

Plan your trade, trade your plan and ALWAYS try to asses the risk/ reward ratio you are about to trade.

END_OF_DOCUMENT_TOKEN_TO_BE_REPLACED

I looked for some news that may explain the large sell off Friday and almost the same level of bounce today….I saw a few things but must admit none made sense to me, so my clients who are “conspiracy theory believers” may have won this one…..

I saw something about Fed officials speaking today “infused confidence back”, saw another thing that Friday was due to North Korea nuclear tests…yet another explanation spoke about rollover. Another news flash spoke about possibly removing some of the stocks from the financial segment of the SP500, specifically “good performing real estate stocks from the financial/ banking sector…..not to mention the “9/11” effect….and more and more etc. etc…..

My guess is the FED once again too concerned with keeping stock market prices higher than the paying attention to the rest of the economy…..I feel that QE in general and other FED action created artificially higher stock market prices which will one day explode in a violent way. But that is a topic for a whole new discussion.

Bottom line is I have no explanation but here is what the hourly and daily charts look like: 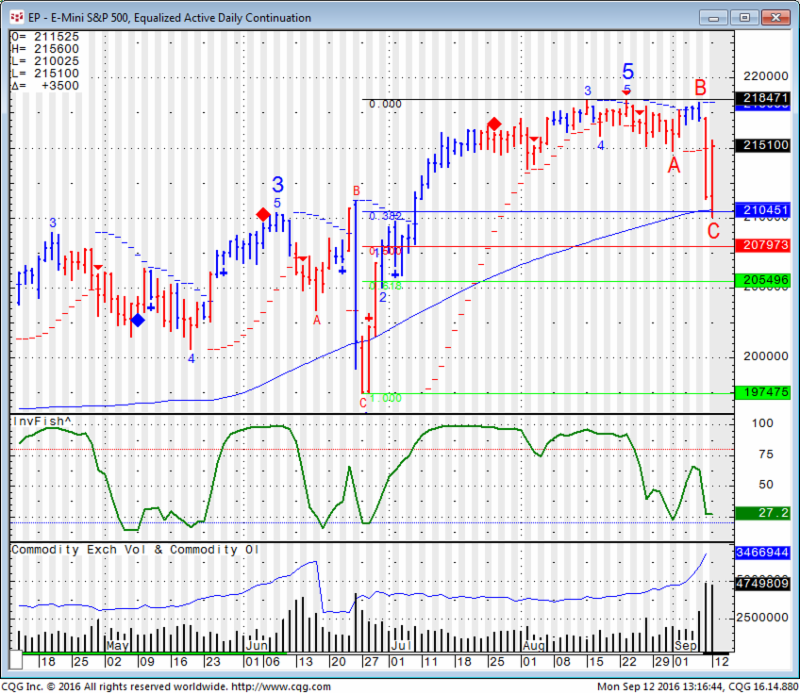 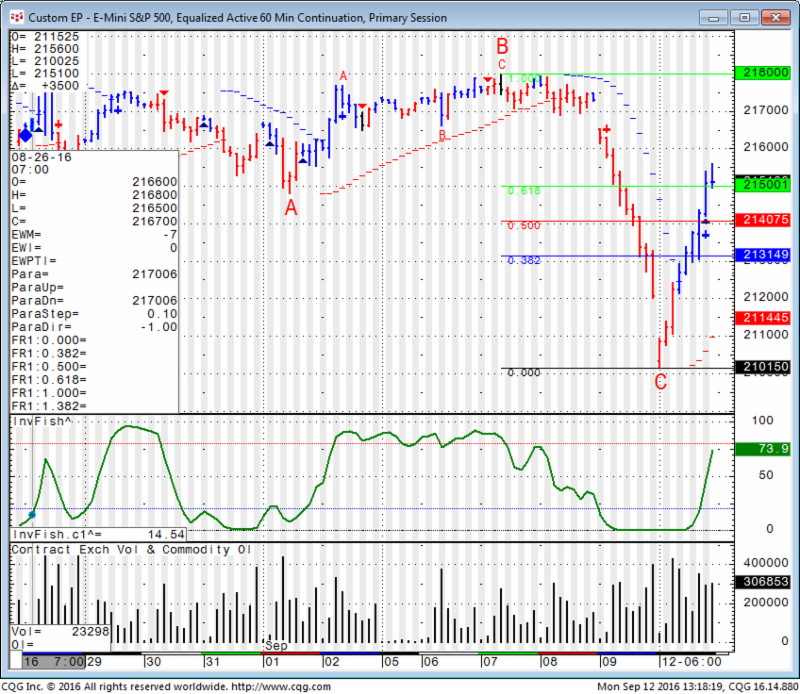