How Does Crude Oil Affect Gas Prices? What Else Does?

The answer to the question in the title of this piece was stated pretty assuredly in a 2005 publication by the Federal Trade Commission. The most important factor in the price of gasoline, the 166-page report concluded, was “the world price of crude oil“. It went on: “Over the last 20 years, changes in crude oil prices have explained 85% of the changes in the price for gasoline in the U.S.”1 And there aren’t too many macro-unknowns out there to affect the price of crude oil. The world produces roughly 85 million barrels of oil every day and every day the world’s population consumes about 90 million barrels. And the generally accepted relationship between crude oil and gasoline is that for every $1 dollar per barrel crude oil moves, gas prices move about 2 ½ cents at the pump. It’s also generally accepted that there’s approximately 1.5 trillion barrels of oil yet to be extracted from the planet – what are called proven reserves – equal to about 50 more years of supply based on our current consumption rate. And according to OPEC’s web site, that cartel – created over 50 years ago – controls about 80% of those reserves. 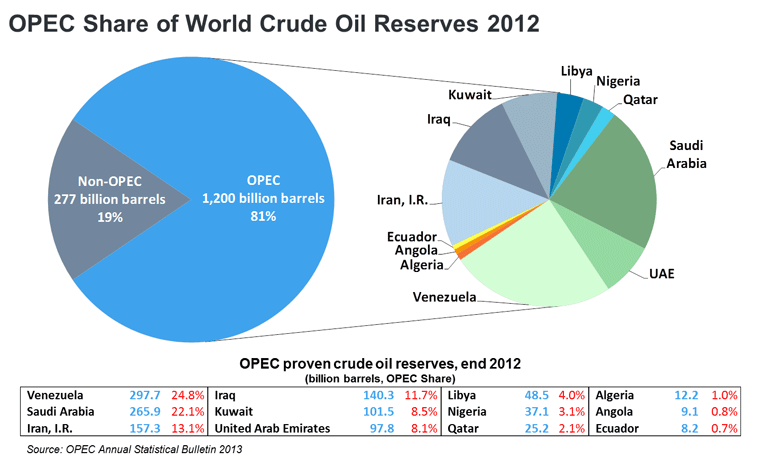 Account for some margin of error and those are all pretty workable numbers for a global commodity like crude oil to live with. The quandary for tracking gas prices isn’t that you can’t measure them accurately against the price of crude oil. That relationship is pretty ingrained. It’s the many other factors that also come into play – at different levels of influence and intensity and at irregular intervals – that cause gasoline prices to move.

A quick internet search for news on the subject and you’d have found any number of explanations for the fluctuation in the price of crude. Look at the selection of news that just references the ebb and flow of tensions around the Middle East – a region that produces over 30% of the world’s daily supply. Let alone the last six months, in the last few years you have the Egyptian revolution, coup d’etat and subsequent political violence, the Syrian Civil War, the post-U.S. withdrawal from Iraq and following violence, the tension surrounding Iran’s suspected development of nuclear weapons. Add to that the sometimes strong social and political tremors in other oil producing regions like Angola, Nigeria, Libya or Algeria (they account for about 8-10% of the world’s supply). A plot twist from any one of these dramas can send crude oil into frenzy. And don’t count out the now-meaningful trajectory the world is on toward exploiting alternative energy solutions. Collectively, sources like solar, wind, geothermal and nuclear energy, natural gas, “clean” coal and bio-fuels are starting to “move the dial,” in terms of providing a substitute for oil.

Focus more narrowly on the forces within the U.S. and you’d find explanations just as varied. Refineries are running at various degrees of capacity, our nation’s enormous pipeline system is moving supplies at various levels of efficiency – there’s a closure for maintenance here, a newly built pipeline comes on-line there.

And these forces are just on the supply side of the equation. On the macro-demand side of things, a factor gaining prominence in the equation is the economic growth of China and the transformation of other countries from predominantly agricultural to “developing,” or, “newly industrialized.” Depending on who measures this – the United Nations, the International Monetary Fund, the World Bank, etc., from Afganistan to Zimbabwe, they number almost 150 countries growing increasingly in need of more and more available energy. Related to this is our planet’s future population growth, calculated to grow from its current estimate of 7 billion to a forecasted 10 billion by 2050.

And on the macro- and national-demand side of the ledger there’s Americans’ raw thirst for oil and gas. Probably the main reason gas prices fluctuate as much as they do in this country is because Americans use so much of it compared to everyone else. Our country accounts for about 20% of the entire world’s daily consumption. Any change in our massive oil diet will affect the price of crude – and gas prices. Because they affect people’s potential driving habits, even weather changes in this country can move the price of crude on the global market – and the price of gas. Talk in the halls and platforms of our government can send crude oil and gas prices a shudder. If you were following the 2012 presidential race, you’d have heard a variety of plans to lower the price paid at the pump for gas: more research on and development of alternate fuels, increasing mileage requirements for automobiles, lowering or removal of environmental, permitting or tax hurdles to drilling and transporting oil – remember ‘drill, baby, drill!’ and the Keystone Pipeline?

Certainly, if you’re looking for what affects the price of gas – on the futures market or at the pump – keep up on the news of day from both a global and national viewpoint. It can provide you with clues to what might be seen on the surface as more conspicuous price changes. At the same time, know that in the bigger picture, the price of crude oil dominates in its influence of what you pay at the pump and where the futures markets are trading.

About mid-February 2011, the 2012 U.S. presidential campaign was heating up. One of the early candidates for the Republican Party was ex-House Speaker Newt Gingrich. At that same time the whole country was watching gas prices spike to near $4.00 a gallon and Speaker Gingrich decided to roll out a new campaign logo: a gas pump with the price set at $2.50 per gallon, with the Newt 2012 logo on the pump. He even promoted a new hash tag on Twitter: #250gas. By the time Speaker Gingrich bowed out of the race in April 2012, the average retail price for a gallon of gas slid from that near $4.00 mark, down about fifty-five cents by July, back up about fifty cents in September, down about sixty-five cents to 3.22 that December and right back to near $3.50, where it was when he kicked off his new campaign slogan. Needless to say, it was a raucous year for the Speaker but a typical one for the price of gas.

Mark O’Brien is a Senior Broker at Cannon Trading Co. He graduated with a BA in history from the University of California, Santa Barbara in 1987 and has been a licensed commodities broker since 1992, when phoning the exchange floors to place orders was the way trades were made. In those 20+ years, Mark has acquired a considerable knowledge of the markets and the range of options and futures strategies to trade them. He’s shared his insights over the years with several news and information outlets, including Bloomberg News, Forbes, Futures World News, Los Angeles television channels.

Trading Futures, Options on Futures, and retail off-exchange foreign currency transactions involves substantial risk of loss and is not suitable for all investors. Past Performance is not indicative of future results.

Copyright © 1998-2021 Cannon Trading Company, Inc. All Rights Reserved
RISK DISCLOSURE: Past results are not necessarily indicative of future results. The risk of loss in futures trading can be substantial, carefully consider the inherent risks of such an investment in light of your financial condition.
10
10