A plural of indexes, indices is a term often used in the markets. There are different indexes or indices in the markets and these don’t always move up or down in coordination. Indexed moving in tandem would create redundancy meaning that we don’t need more than one of them.

The Dow and the S&P500 are two extremely noteworthy as well as popular indices. While a change in the Dow indicated that the expectations of the investors have changed with regard to the risks and earnings of large companies, the S&P500 features 500 of the most highly traded stocks in the U.S.

Each index is different from another and each one behaves differently. You won’t find any one index that has continued to look the same over the years. Moreover, every index depicts a different thing. You can gain a deeper understanding into the world of indices.

We at Cannon Trading help you by providing the latest information on indices and their market performance. You can read it all here under one archive tagged as Indices. Read and be informed.

Greetings! My lesson for today was something I actually mentioned in previous posts.

Twice I was in the right direction ( short the mini Russell) and twice I got stopped out only to see the market makes the move I anticipated.Should have implemented my own advice and WIDENED the stop based on recent volatility.

Better late than never, my new stop settings are in place for tomorrow!

END_OF_DOCUMENT_TOKEN_TO_BE_REPLACED

That was an historic week!

Few things to keep in mind:

* Some of the biggest one day rallies usually take place in bear markets.

* “Death Cross” occured in the Dow Jones, where the 50 days moving average crosses below the 200 day moving average. See chart below. This has not happened, yet, for the other 3 major indices ( NASDAQ, Russell 2000 and SP 500)
* In my opinion, unless you buy some longer term options and you are right on the direction and the timing, it does not really matter if you are right on the market direction..it is more important how you manage you position size, money management. In short try to take the emotions out of it and I think you will see things much clearer….

Summary from our friends at TradeTheNews.com below the daily chart of the Dow Jones Cash Index below.

This September has the potential of being one of the most volatile trading months in history…will know for sure by Sept. 30th….

Wishing you a great trading month ahead!! 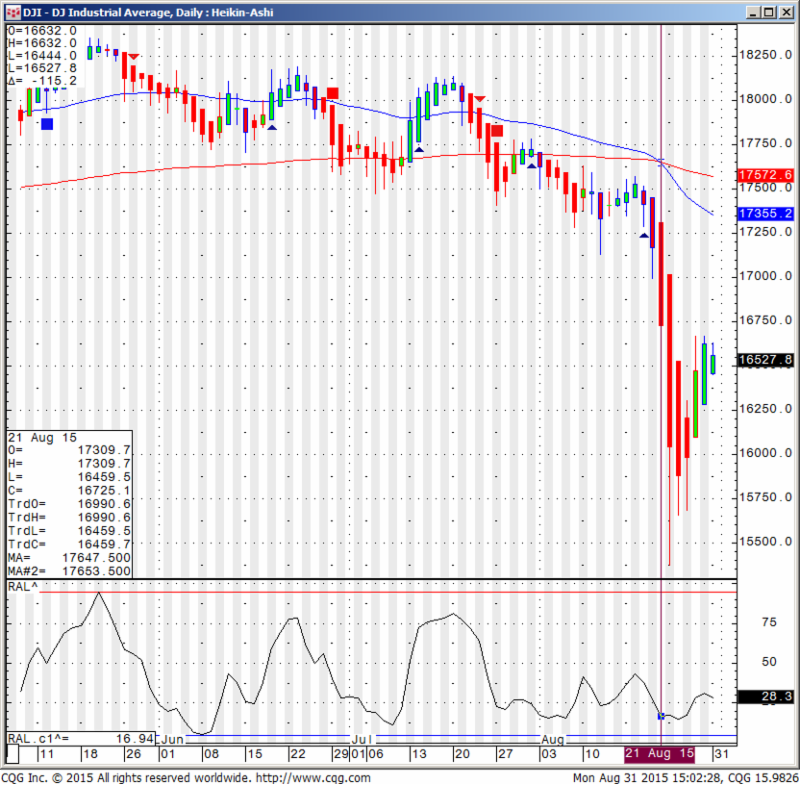 After China refrained from expected stimulus moves over the weekend, global markets went into hysterics on Monday morning. Chinese stocks went negative on the year, helping to trigger a mini flash on at the New York open, sending the S&P 500 into its first correction in three years. China fears hit emerging markets again, exacerbating tensions in the market that were already on edge about the uncertainties surrounding an impending Fed rate hike. Chinese stimulus finally materialized after the Shanghai market closed on Tuesday, helping to reverse US stocks that morning though they retested the Monday lows by the end of the session. The fever broke on Wednesday as Chinese stocks stabilized, and bargain hunters began pouring in, sending most global equity markets higher through the back half of the week. Trading volumes remained very heavy during what is normally a quiet late August week and currency and commodity markets experienced wild volatility spikes as well. By the end of a week that shook complacent markets, the DJIA ended with a 1.1% gain, the S&P500 was up 0.9%, and the Nasdaq added 2.6%.

With markets on fire, all eyes were on Beijing to do something (chatter favored a big, meaty RRR reserve ratio cut) before the open of trade on Monday to stop the bleeding. China’s policy response did not impress: regulators said China’s national pension fund was now authorized to invest in the stock market, and the stock slide continued unabated. The action was so bad that Apple CEO Cook was compelled to release a statement to help calm markets saying the company was seeing strong growth in China in July and August, with iPhone activations up over recent weeks. No further extraordinary Chinese actions arrived during the Asia session on Tuesday and the Shanghai tanked another 7.6%. With the smell of fear everywhere, the PBoC finally stepped in with a 50 basis point RRR cut and lowered key deposit and lending rates, in a move that seemed to be timed to trap the short sellers that the government has been railing against.

END_OF_DOCUMENT_TOKEN_TO_BE_REPLACED

I posted the following on FinanceMagnates.com back on August 5th about Dow Jones making lower highs and lower lows. Feel free to read that analysis at:

http://www.financemagnates.com/executives/insights/lower-highs-and-lower-lows-on-dow-jones-index/. And below you will see my updated chart of the same Dow Jones Cash Index, except that this time it is a weekly chart. Note we are right around major weekly support level ( 17035) and how we close tomorrow may provide important clues going forward: 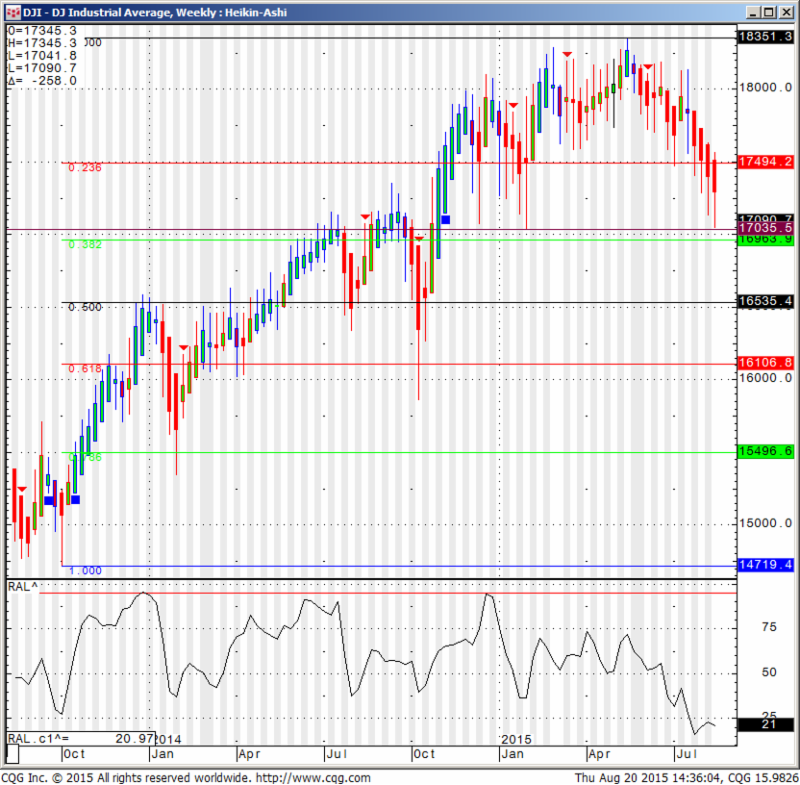 END_OF_DOCUMENT_TOKEN_TO_BE_REPLACED

In this new interview, Steve Craig, editor of Elliott Wave International’s Energy Pro Service, shows you what extreme readings in some of his market indicators mean for crude from here. Watch this interview now for a unique take on this key energy market.

This article was syndicated by Elliott Wave International and was originally published under the headline (Interview, 4:58 min.) Crude Oil: Will the Decline Continue?. EWI is the world’s largest market forecasting firm. Its staff of full-time analysts led by Chartered Market Technician Robert Prechter provides 24-hour-a-day market analysis to institutional and private investors around the world.

Did you know Cannon offers FOREX trading including the MT4 platform?

Did you know that Cannon offers trading systems on auto trade basis including iSystems?

Many ways to trade any market, many ways to lose money in any market and only very few ways to lock in gains. If you need help creating a trading plan, visit our broker assist services.

END_OF_DOCUMENT_TOKEN_TO_BE_REPLACED

Daily mini SP chart ( Heikin-Ashi) for your review below: 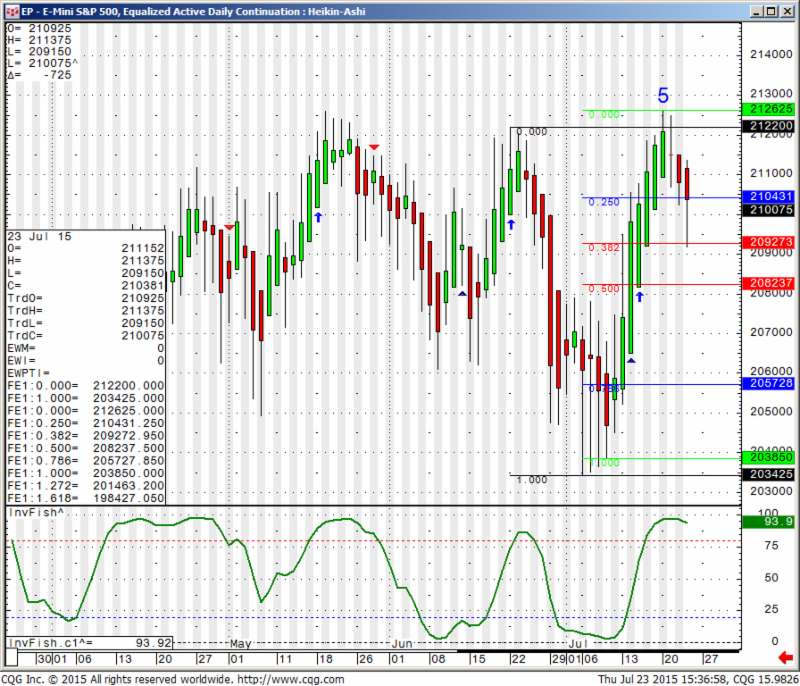