“U.S.-produced oil is a substitute, in terms of volume, to non-U.S. sources, and it’s geographically safe and secure, sending a hedge into the WTI price, not into Brent,” said Richard Hastings, a macro strategist at Global Hunter Securities.

Hastings made the comments when the price spread between the crudes traded at less than $1 back in July “Brent, in turn, reflects macroeconomic weakness from around the world, something which is less meaningful to WTI pricing,” he explained. 1

What Are the Major differences between these crude oil futures contracts?:

Sulfur Content: Some Crude oils are easier, less costly to refine into gasoline than others. Low sulfur crude is also known as Sweet crude. The commonly used measure of sulfur content is API gravity, is a measure of how heavy or light a petroleum liquid is compared to water. If its API gravity is greater than 10, it is lighter and floats on water; if less than 10, it is heavier and sinks. API is the American Petroleum Institute.

WTI Crude API gravity of around 39.6.

Brent Crude has an API gravity of around 38.06.

OPEC basket of oil from 7 countries is the sourest, At present the API gravity for the Basket is heavier, at 32.7.

Location: Brent Blend is a combination of crude oil from 15 different oil fields in the North Sea. It is less “light” and “sweet” than WTI, but still excellent for making gasoline. It is primarily refined in Northwest Europe, and is the major benchmark for other crude oils in Europe or Africa. For example, prices for other crude oils in these two continents are often priced as a differential to Brent, i.e., Brent minus $0.50. Brent blend is generally priced at about a $4 per barrel premium to the OPEC Basket price or about a $1-2 per barrel discount to WTI.

WTI is also known as Light Sweet Crude, the majority of which is located in the Permian oil Field.

The OPEC Basket Price is an average of the prices of oil from Algeria, Indonesia, Nigeria, Saudi Arabia, Dubai, Venezuela, and Mexico. OPEC uses the price of this basket to monitor world oil market conditions. OPEC prices are lower because the oil from some of the countries have higher sulphur content, making them more “sour”, and therefore less useful for making gasoline.

The narrowing of the spread or difference between the price of WTI and Brent is supported by several factors that have:

Raised WTI (Cushing, Oklahoma) prices because the infrastructure limitations that had lowered WTI prices are lessening

According to the U.S. Energy Information Administration, The strengthening of WTI relative to Brent in the first half of 2013 can be attributed to a number of factors: 2

U.S. refineries are running at high levels. Crude runs at refineries have increased steadily since early March to reach some of the highest levels on record. At 16.1 million barrels per day (bbl/d) for the week ending July 5, U.S. crude oil runs were the highest for any week since 2007, helping to elevate WTI prices in the spring and summer of 2013. 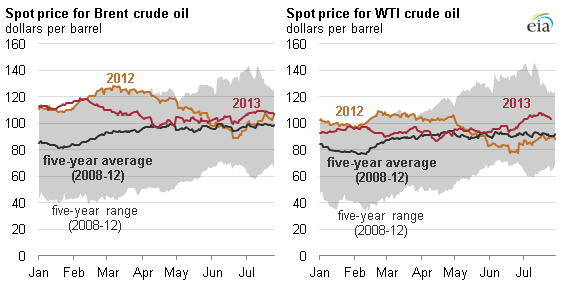 EIA expects the WTI discount to widen to $6 per barrel by the end of 2013 as crude oil production in Alberta, Canada, recovers following the heavy June flooding and as Midcontinent production continues to grow.

Trading Futures, Options on Futures, and retail off-exchange foreign currency transactions involves substantial risk of loss and is not suitable for all investors. Past performance is not indicative of future results. You should carefully consider whether trading is suitable for you in light of your circumstances, knowledge, and financial resources. You may lose all or more of your initial investment. Opinions, market data, and recommendations are subject to change at any time.

Copyright © 1998-2021 Cannon Trading Company, Inc. All Rights Reserved
RISK DISCLOSURE: Past results are not necessarily indicative of future results. The risk of loss in futures trading can be substantial, carefully consider the inherent risks of such an investment in light of your financial condition.
10
10